Evelyne Béché invited with her two choirs (Emichante and Choir of the University of Maine) at Carnegie Hall in New-York, in an international choir to sing
Misatango by Martín Palmeri, Sunday 18th January 2015. 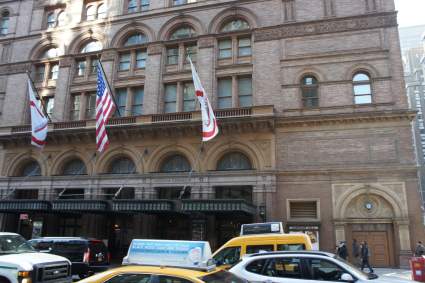 The origin: misatango in the department of Sarthe (France) with choir Emichante
In April 2011, four concerts have been performed in churches in the department of Sarthe (France), for the second time in France. Evelyne Béché had been thrilled by the Misatango by the Argentinian composeur Martín Palmeri, a mass with tunes of tangoEvelyne Béché conducting choir and orchestra, Martín Palmeri at the piano, 03rd April 2011 at the church of Bessé-sur-Braye, et had get her choir Emichante of the Intermunicipal music school of Vallée de la Braye and Anille (EMI) to follow her in the aventure. More. 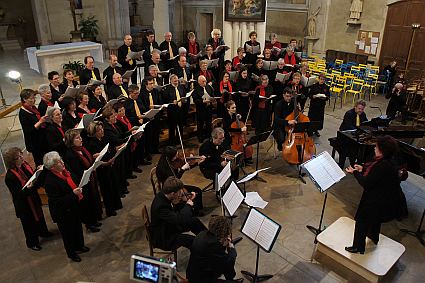 Evelyne Béché conducting the choir Emichante, the string quintet of EMI, Wolfgang Weniger at the bandoneon and the composer Martín Palmeri at the piano, 03rd April 2011 at the church of Bessé-sur-Braye


Then, it was agreed to perform again the misatango, together with the Choir of the University of Maine, and the date has been set: 23rd May 2015 at the abbey of Epau (Le Mans, France), always with the string quintet of EMI, W. Weniger at the bandoneon and M. Palmeri at the piano.


The invitation mails
A Friday morning, in April 2014, when opening her mail:
"Dear Evelyne Beche, My name is Kevin Taylor and I am the program coordinator at Distinguished Concerts International New York (DCINY).  Our organization is honored to be working in collaboration with composer Martin Palmeri on the production of his work ‘Misa Tango’ at New York’s famed Carnegie Hall.  This event will take place in January of 2015 and be conducted by Argentinean Maestro Pablo Di Mario. Martin has personally recommended select directors who he felt would be appropriate and talented enough to take on this project, and whose involvement he would enjoy.  Through DCINY’s unique structure, amateur singers from across the world are provided the opportunity to perform on these legendary stages in the US and work with celebrated composers."

Then the official invitation letter:

Some companies or agency have responded (corporate sponsorship), which they are gratefully acknowledged.


Nevertheless, it still lacked a lot of money, and that is why a crowdfunding web site has been created.


Said in the press

The report of the radio France Bleu Maine.


The rehearsals in New-York

Three rehearsals with the 320 singers took place from 16th to 18th January 2015: two in the New-York Society for Ethical Culture with piano, and one in the Carnegie Hall with orchestra.

The concert was performed with a string orchestra, three bandoneons, Martín Palmeri at the piano, and was conducted by Pablo di Mario. Soloist: Kristy Swann.